Loving Thoughts From the Past 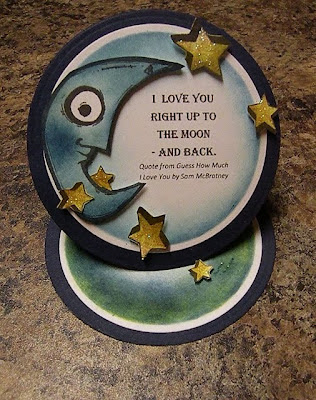 The Octopode challenge this week is to make something about Lurve. This sweet little Octopode moon and stars reminded me of the book, "Guess How Much I Love You." This book was my oldest daughter's favorite book when she was little (I think it probably is); sometimes I think she just wanted me to read it so she could watch me cry because I cried every time I read the ending. She still has a framed poster of the scene where big nut brown hare says these words to little nut brown hare, and she is 21 now.

This is going to be her Valentine's card, and my heart smiles knowing it will thrill her because she loves that story so much and because she already thinks that Octopodes are the coolest things (me too).

I made the card by cutting a double circle of SU! Almost Navy card stock with My Big Shot and a Spellbinder Circle Die leaving a little uncut at the top so the pieces would stay together. Then I cut another circle of Almost Navy, and glued it to the top half of the double circles after I folded the top part of the double circles in half. This makes an easel card (there are several tutorials on SplitCoast Stampers if you are interested because my description is horrible). I then printed out the quote on SU! Whisper White and cut it out using the next size smaller circle die. I sponged around the paper while it was still in the die using SU! Cool Caribbean and then a thinner line of Almost Navy. Next I printed out my digital image twice and cut out the moon and 6 stars. I sponged the moon with the same SU! blue ink pads, and I used SU! Summer Sun and More Mustard on the stars. I did all the colors on the botton layer of white paper - gave it a green look but I went with it because it reminded me of the moon. Next I layered on the images and put some Ranger Diamond Stickles on the stars. Fun, fun, fun!!!!

Thanks for the inspiration Lily!