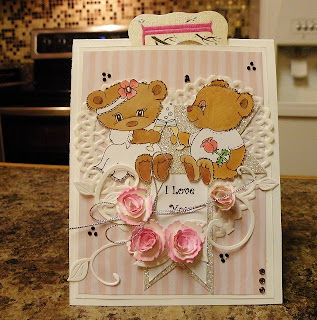 It is make something with a pocket time at Squigglefly (SFS1913). I used the new A Time to Celebrate Image by Diane Carubia which is now available at Squigglefly. I made it so a little gift card could be tucked into it. This is an anniversary card for hubby - we have two anniversaries each year since we got married twice when we got married - once in April and once in June. We had planned and paid for the wedding in June but wanted to go on a trip to Las Vegas before our wedding so our preacher advised us we should get married before we traveled together alone. So we got married during Church Services before our planned wedding. We still went through the second wedding too since it had already been paid for (a little chapel in the mountains).

I also made another card with a pocket as well but I totally changed the image and was almost afraid to post it. My daughter Crystal graduates this month (and gets married - urghhh). I used the Graduating Girl image by Cheryl Alger (available at Squigglefly) and added more hair to her. Crystal has hair she can just about sit on and I wanted it to look more like her. In the process, I think I changed up the image a bit too much. I know she will love it so I had to share it. I am giving her more than $20 but that's all I had when I snapped the pictured - LOL! 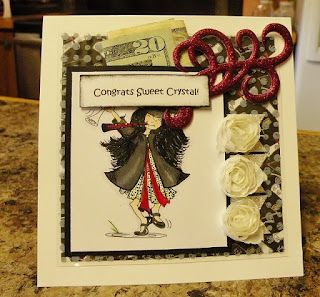