On my first card, I did a quick background by inking up some foil with inks in circles, spritzing it all with water, liberally spraying on some Fireworks spray, and then slapping down the paper to soak it all up.  After it dried, I threw some water on it and then mopped it up with a paper towel.  It makes a cool background and if you do lighter ink in the middle circle, you don't have to worry about your lighting on the card.

After that fun adventure dried, I stamped the new The Floor image (this is going to be a well used image - isn't it great?).  I had so much fun doing some image surgery to create my pumpkin grouping!  Most my pumpkins are from the Hot Air Balloon image:  I stamped them with the balloon stamp and then again with the new Filgree Pumpkin image,  I cut the basket portion off at various levels from the balloons to create different sized pumpkins, sponged them with Distress Inks/Oxides, and put them in a little group. Next, I stamped the new Pumpkin Patch image and cut out one little pumpkin, the large leaf, and the sign.  I stamped a bunch more of just the large leaf so I could cover up my surgery.  I sponged all the images as I was too lazy to color. I still needed more stuff to cover the surgery, so I die cut a bit of foliage (Tim Holtz/Sizzix).  So fun and you can see that pretty Fireworks spray shimmer if you look closely at the corners of my background. 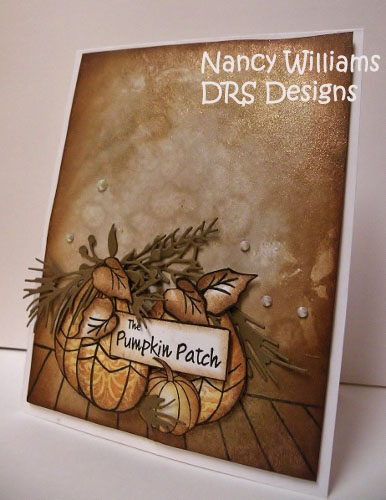 I did another quick card based on this week's Inspiration Challenge at Splitcoaststampers - I was inspired by a Victorian lampshade at Victorian Trading Co.

I used a Cottage Cutz Bethlehem die cut and sponged Distress Inks around it to get a little cityscape and a cool sky.  Next, I splashed on some water and let it all dry.  After it all dried, I sponged on a bit of orange using  a mask to make a little starburst effect. Then  I stamped the Silent Night with Jesus Star image and added a bit of Stickles to get an even better starburst effect.  This was a super quick and easy card to make even if it doesn't sound like it. 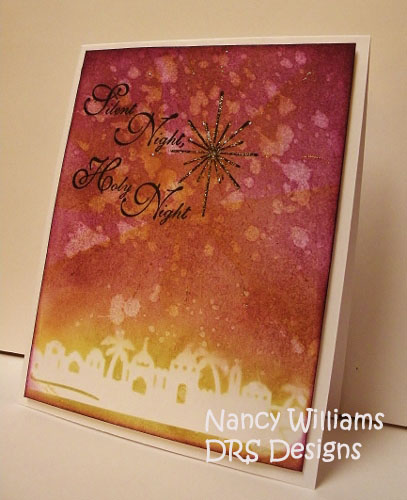 Super fun to make cards.  I know I say that all the time, but it really is true!