Flowers, an Apron, and a Cat! 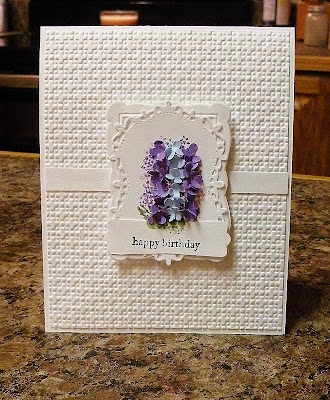 Used some older SU! Flowers and some punched and twisted MS hydrangea punched flowers. Another Birthday card done so I can catch up on another late birthday!

Here is a bit different card - it is a prototype actually: 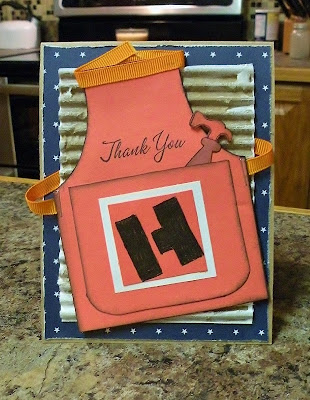 I work at Rheem Manufacturing (Water Heater Division) and my group mainly deals with The Home Depot. I need some Thank-You cards for work and thought this would be a good concept for them. I did this symbol with a pen (I know that is obvious) and will need to do future ones with my computer. I will also use black or white ribbon on future ones because the oranges on this clash a bit. I am still playing around since I will probably make about 20 of these (give me any suggestions you have!!!). Wouldn't this be great with a little gift card in the pocket?

Also caught up on a two SCS challenges - last week's Sketch Challenge and the Teaparty Challenge from two weeks ago. I needed to catch on the Teaparty challenge especially because it involves a friend's son. For his birthday, he requested cards to give to kids in a local hospital. He spent a lot of time in that hospital and feels connected to the children who have to spend their birthdays and holidays there - isn't that the sweetest! The challenge was to make a funny children's birthday card. I used the kitten image from Enid Barnes (available HERE from Squigglefly). Inside it says "but the dog ate it - I promise." Corny I know but I was channeling corny on Sunday! 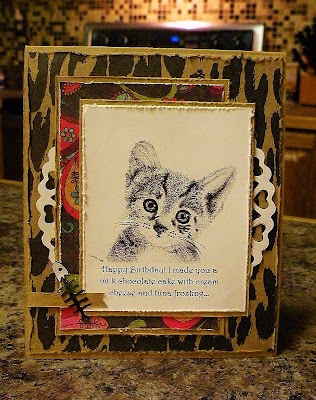 Hope your week is going well so far! Hugz!!!!