The Sandia Mountains, Coffee, and Lots of Chile!

I am excited to share a few pictures from last week's trip to New Mexico.  It was great to go "home" after almost 20 years and to be able to share some of my favorite places and foods with my youngest daughter, Alex.  To keep this post from being super long, I am going to share my trip in installments.  This post includes pictures from our first two days.

My daughter and her son came in on a later flight so I picked them up at the airport (one of the coolest airports ever by the way - full of Southwestern archtecture, art, and avaition history), and we immediately drove to the foothills so they could ride the Sandia Peak Tram.  It is the third longest tram in the world - it was the longest until 2010.  It takes you to the 10,378-foot crest of the Sandia Mountains. The views are wonderful, but my pictures didn't turn out very well as my fear of heights kicked in.  I started hugging  the walls closely and not worrying about the views.  When you get to the top, you can see both sides of the mountain and they say you can see 11,000 square miles.  On the east side you see the mountains for miles and miles. On the west side you see Albuquerque. 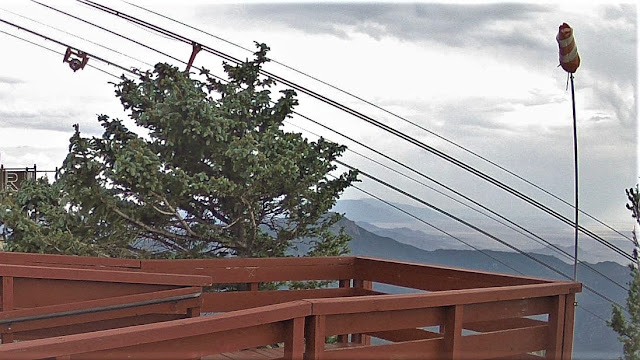 We were starving when we got off the tram so we went to the Owl Cafe which was my favorite green chile cheeseburger back in the day.  It was still very good, and eating there brought back a lot of memories.  It is still very popular and is part of the Green Chili Cheeseburger Trail - how fun there is a GCCT!  We also ordered their famous french fries with white gravy. 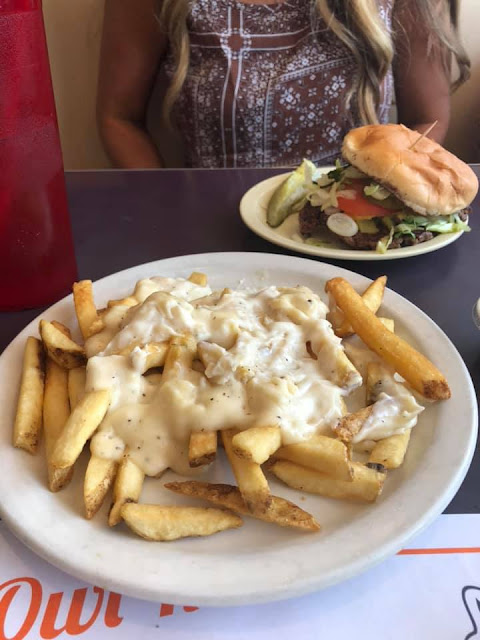 The restaurant has mini jukeboxes at the tables and my grandson helped me pick out a few songs. 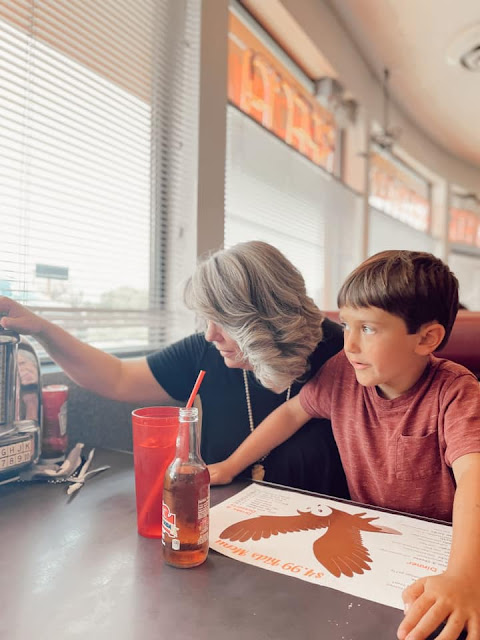 We met my best friends Veronica, Chuck, Jimmy, Michelle, and Kelly for a pizza picnic that night (of course it was Dions Pizza and full of green chile).  I was so busy catching up, eating pizza and soaking in memories, that I forgot to get any pictures.  These are some of the best friends a girl could have - it was like we were all 16 again laughing, telling stories, and probably boring my daughter.  She was a good sport though.
The next day we met Veronica and Chuck for a breakfast picnic at one of our favorite parks.  We had fabulous breakfast burritos and Rebel Donuts. The burritos were from Golden Pride and were awesome (I had red chile and carne adovado and Alex had green chile and sausage), but the donuts were truly amazing.  This donut shop is so creative and trendy, and it is on the top donuts in the U.S. list. The small sign in the picture says "don't tap on the glass -  it scares the donuts" - lol. 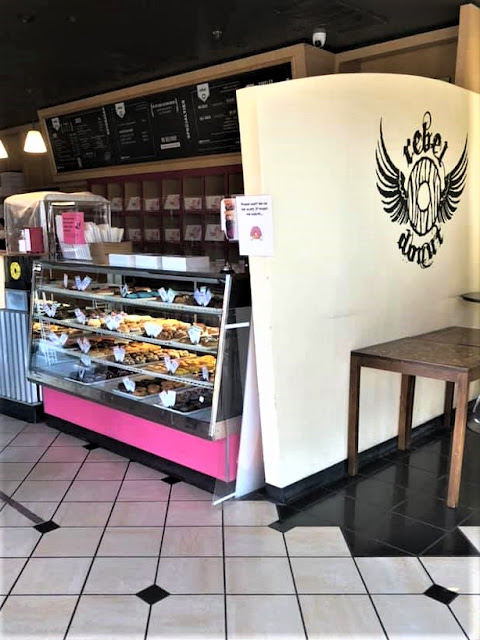 We had to try the Breaking Bad Blue Sky Donut - it has rock candy on top - the same rock candy that was made to be the stand in for blue crystal meth in the Breaking Bad TV show which was filmed in Albuquerque.  The icing is blue cotton candy icing. 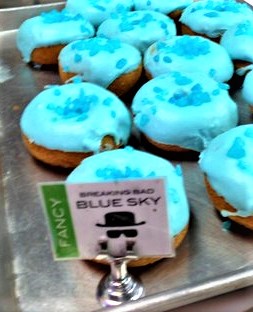 My favorite donut ended up being the red velvet with chocolate and red chile powder icing. I could have eaten all of them!
After the picnic, we went to Old Town Albuquerque for some fun shopping, site seeing, and the Rattlesnake Museum.  I don't like snakes, but the museum was super cool and thrilled my grandson who was made a tour leader and told we had to follow him - such big power for a 5 year old! 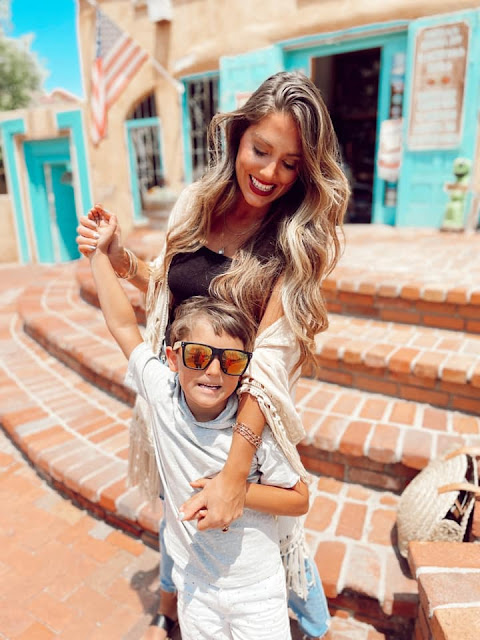 Art is everywhere - even in the trees! 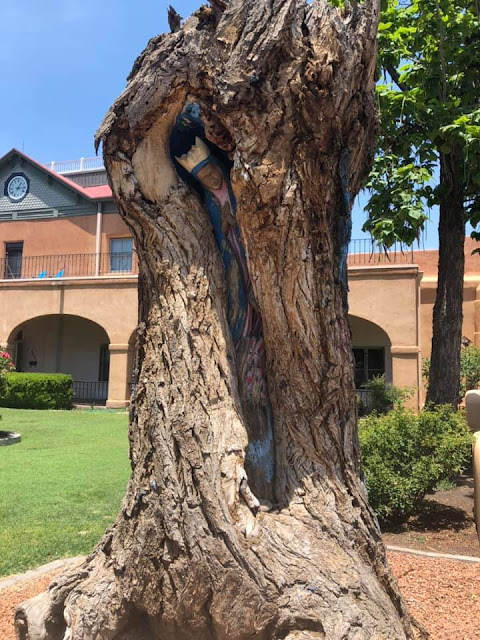 It was very hot so we stopped for some cool drinks at the Black Crow Coffee Shop.  I had an iced coffee with chocolate and red chile powder and Alex had a fruity tea.  These next two pictures are my tickets to Elizabeth's T is for Tuesday Linky Party where we share bits of our life and something related to drinks. 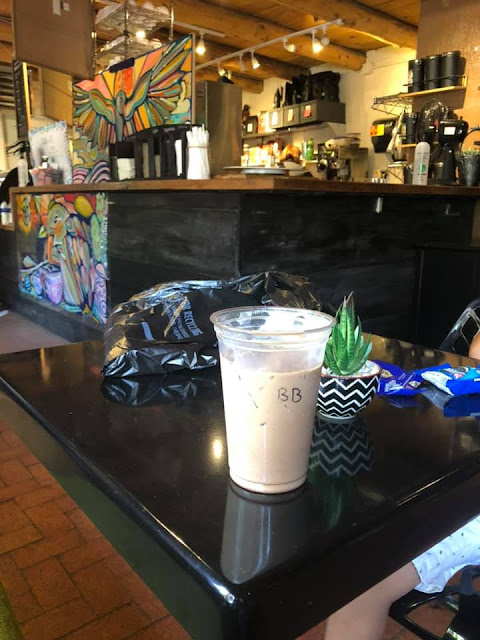 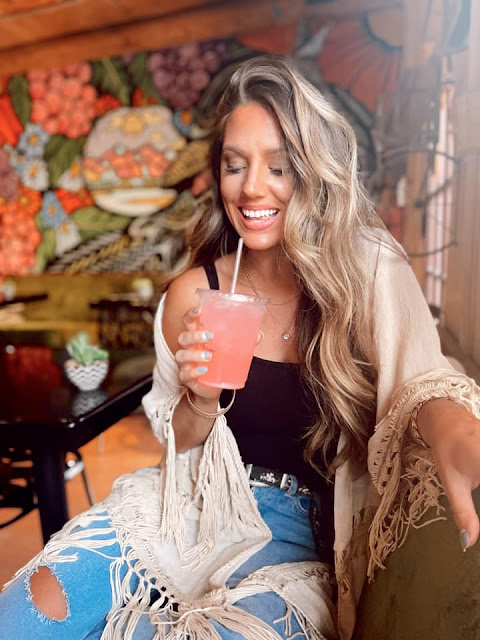 I can't wait to show you the rest of our trip!  It was a fabulous trip and surprizingly, I only gained one pound!
Hugz
Nancy