December 29, 2020
Hello friends.
Sad news.  I lost my Pop the day after Christmas.  He suffered through pulmonary fibrosis which is a horrible disease.  He is at rest now.
He and my Mom shared a special love. She always told me that if she had had him in her life early on, they could have taken on the world. He made her very happy, and he was such a rock to her when she faced her battle with cancer. When she got her diagnosis of stage 4 breast cancer, she said she didn't want to fight it or take any treatments.  She had already fought it once and it took a lot out of her.  Pop told her that he would be there every step of the way, and he wasn't willing to give up.  She fought it and had several more very full years where she got to see both my daughters get married and the birth of quite a few great grandchildren. But more importantly, she had more time with him - something she deeply treasured.  He was true to his word, and he was there through every step like a rock.  Then when she passed away,  he would have a glass of wine ready for me when I came home from work, and we would share stories and tears and our hurting hearts. So he was a rock for me too.
I say we would share stories but mainly he shared the stories.  He was one of those rare story tellers who could grab your attention and make you feel like you were right there when the story was happening.  He told me stories about his life and stories about my Mom.  Stories about things my Mom told him that she never told me or shared with me.  Those stories were like gold to me.
My Mom married Pop when they were in their 70s.  Both were widowed for a number of years, and Pop was my best friend's father.  One Thanksgiving our families shared together at his house, they sat by each other and fell in love. A number of things happened after that:
*My best friend became my Sister - that was sooo cool.
*I finally had two brothers - something I had wished for deeply when I was little.
*I lived next door to Pop and my Mother sold her house and moved next door so we could be next door neighbors.
* My Mom found the love of her life - and she meant it.  Her time with him was the happiest of her life.
*Leavie told everyone I was his daughter and never said the word "step."  He told me he loved me as much as if I had been born to him.  He told me this often. It healed a number of hurts in my life.
Some people dismiss all this and feel that because this all happened when we were older that I couldn't really think of him as my father, but I did and I do.
I have a favorite picture of  my Mom and Pop together at my daughter's beach wedding -  I painted it in my bible in 1 Corinthians which has some beautiful words about love.  They are together again now. 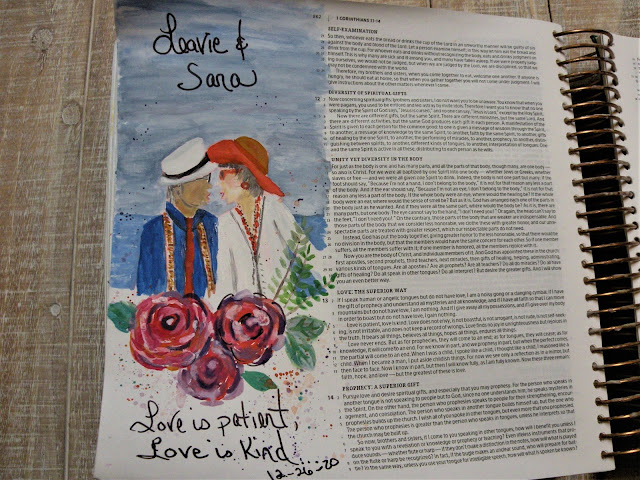 Linking to Tracey's "The Meaning Of" theme at **Art*Journal*Journey*  - it fits in a number of ways.
If you are still with me, I have a few more BAJ pages to share - I find it healing to do them so it has ben helpful to me. 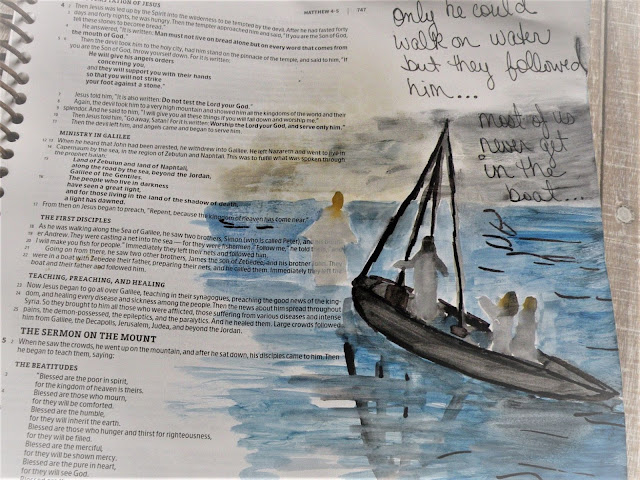 I did this after looking at  Henry Ossawa Tanner' The Disciples See Christ Walking on the Water painting.  It is nothing like it but I like it.  I did it in Matthew 4 which is not were it belongs, but it does fit the Teaching, Preaching, and Healing theme of that chapter.
Then I did a page in Daniel 6.  I drew the lion with an ink pen and then colored it up with water colors.  He looks very sleepy doesn't he? When I first read about it, I read he was 90 when he went in the lion's den, but then I read several other places he was around 70.  70 or 90 - doesn't really matter, it is encouraging that God still has important things for us to do when we are older (something I need to hear these days as I am coming to grips to the fact that I am old - something I said before but am now believing more each day). 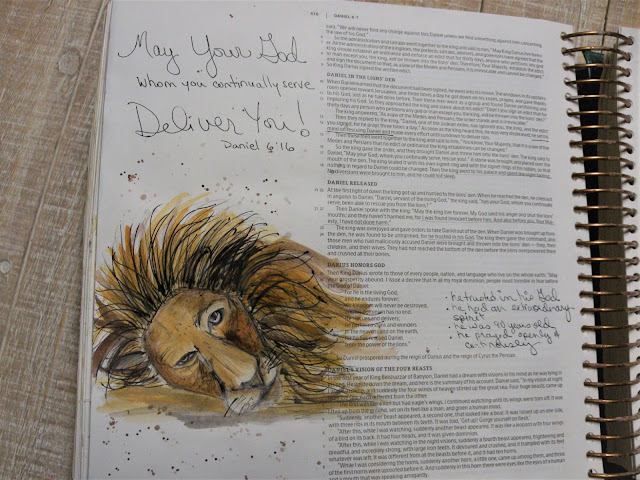 Thanks for visiting this post - it was healing for me.
Hope you are well and getting ready for 2021 and all it brings.
Hugz,
Nancy