April 20, 2012
I would start this post off with Pirate talk, but I just don't want to butcher the language. The current challenge (going on until Sunday) at Haunted Design House is Pirate's Booty. Crafters are encouraged to make a scary Pirate related creation (you have to check out with the design team and the participants have made - some of the best Pirate stuff I have seen in awhile - really!). I have to tell you that I tried to be scary, but this was about as scary as I could get. I could have made Capt'n Jack a little sinister but Johnny just can't look sinister. Even when he was Edward Sissorhands, he was cute, cute, cute. I could have used a scary sentiment, but I really needed a card for a friend who loves Pirates and is sailing some pretty stormy seas and battling some really big sea monsters! That is scary enough!!! 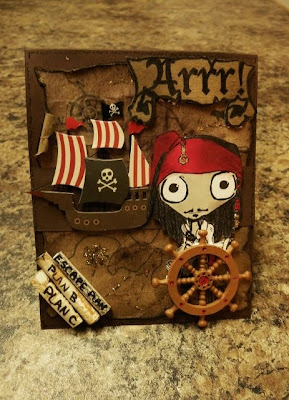 Inside it reads: Luv, I have been labeled a traitor, captured by cannibals, pursued by zombies, sacrificed to monsters, left for dead on a deserted island, stabbed, shot at, thrown in prison (more than once), lost all my possessions, had my entire crew mutiny, and felt the sharp pain of a broken heart. So you can get through these rough waters - just hold on tight and act tough even if you are shaking in your boots! I used the Octopode Capt'n Jack image (colored with Copics and shade with Tim Holtz tea dye), my wheel and ship are 3-D stickers from HL, the bg paper is an internet coloring book page that I distressed and aged (scraped the edges with sissors, scrunched it up, inked the wrinkles, spritzed with marshmellow glitter mist, and then ironed - yes, I said ironed which I only do when crafting), the Arrrr! and scroll are from Rusty Pickle stamps. I used tons of Stickles and lots of SU! Chocolate chip ink and paper. Hugz to all, and may your sea monsters be small and your waters only rough enough to make it an interesting voyage!

September 30, 2020
Hello Crafty Friends. I just got the Stamperia Forest Paper and Die Cuts in the mail so I had to play with them right away.   I have a combo creation - journal page and card.  On the journal page I used my 6x6 Dina Wakley Journal and laid a base of gesso.  I then used Dina's pastel crayons and some SU! inks and stamps.  Also added in some TH Dress Ink in Vintage Photo since I don't know how to make anything without it  (seriously).   The eagle is a Stamperia Forest die cut and is coated with gesso.  Did a bit of stenciling and distressing to finish the page off.  I am linking this the the **Art*Journal*Journey* September Texture Theme (last day - can't wait to see what October's Theme will be).  The die cut and the little smears add texture to the already very textured page.   I love the blue and green together and was inspired to made a quick card for my Son-in-law who cut down some tree limbs for us the other day.  The paper in the middle is from the Stamperia Forest
17 comments
Read more