Some Fun with Edward and William

April 04, 2012
I love William Shakespeare - I don't mean I love to read him, but I love to watch his plays, movies made from his plays, and specific parts of his writings. I love the cool parts of Hamlet - like the "To Be or Not To Be" speech. I also love Edward Sissorhands (actually I love Johnny Depp but since he played Edward, I love Edward). So when I saw the Haunted Design House challenge for this week, I knew I wanted to use these two Octopode Images. The challenge is called "Off With Their Heads." I put Edward's head on William and William's head on Edward. I had a little fun with William's writings as well. 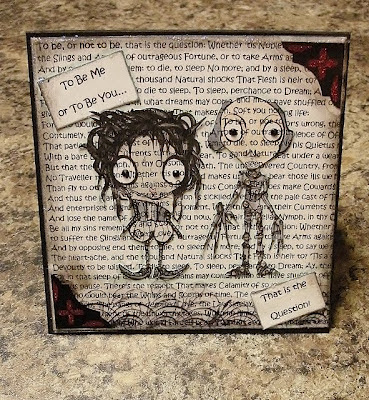 I copied some parts of Hamlet onto some plain white cardstock, printed out Edward/Johnny and William on another sheet with the same parts of Hamlet, colored the characters with Copics, added some Zva Crysals on the eyes and William's new cool body, and sponged around the edges. I then cut the sentiment up and sponged it and added some K&Co findings to the bottom and the corners. I just had to add some sparkle, so I put some Stickles all around the edges.

Tame for the Haunted Design House, but I sure had fun!!!!